Nutrition : the food necessary for function and growth

Acknowledges the fact, that the food we eat, directly affects our Metabolism,
which determines lean tissue maintenance and body fat accumulation

Challenges the oversimplified societal belief, that over eating alone
results in excess body fat gain, as a misguided conclusion

Proposes, that by eating from certain foods groups and eliminating others, establishes the foundation needed for a lean and muscular physique

Metabolism : the chemical processes that occur within a living organism in order to maintain life

When I first came across the idea of food being more than merely energy and building blocks for the body, my viewpoint at the time was – you stay lean by doing enough activity to burn off any excess calories from overeating and because I was engaging in distance running and maintained a slim physique, my belief system was holding true…….or so I thought!

In my blog post From FAT distance runner to LEAN minimalist exerciser, I give a thorough account of my personal journey in changing my perspective on this subject. In Fasting, Ketosis and Fat Loss, I describe how I was able to live entirely off my body fat stores, by not consuming any food for more than two weeks.

In simple terms, Metabolic Performance Nutrition states : if we consume one type of food, it can influence our body to store a majority of what we eat as body fat, while another type of food will be used for building blocks of lean tissues (muscle, bone, connective tissue and organs) and used up as energy, while never becoming body fat, despite the two types of food containing the same amount of calories.

Calorie : the energy needed to raise the temperature of 1 gram of water 1 °C

Furthermore, if we have unwanted body fat and want to become leaner, diet can change our metabolism in such a way, that our body starts to convert stored body fat into energy, which means we will lose (fat) weight.

Metabolism : the chemical processes that occur within a living organism in order to maintain life

Please be informed and aware…

The statements about nutrition, put forth on this page are derived from continually observing the changes in my own physique, as well as those of my clients and friends who follow a similar diet strategy.

What we don’t eat!

The one thing we all have in common is what we don’t eat at all, have in small amounts or only consume occasionally. Bread, potatoes, pasta, rice and breakfast cereal which often makes up the staple in our diet, are pretty much eliminated. The reason for removing these foods, is because of their higher carbohydrate content.

Carbohydrate : a large group of organic compounds occurring in foods, including sugars, starch, and cellulose.

Because the carbohydrate in any food eaten, becomes sugar in the body, it has a big effect on how our metabolism functions. Sugar stimulates the necessary release of certain hormones in order to be used as energy immediately, stored as Glycogen or converted and stored as body fat.

Glycogen : a substance deposited in bodily tissues as a store of carbohydrates

Should these same hormones remain high over a prolonged period of time, due to a lot of sugar entering the body, they can interfere with our ability to release body fat, which would otherwise be used as energy when Glycogen stores are running low.

Limiting the amount of sugar in our diet, helps to maintain a well functioning metabolism, which allows the release of stored body fat as needed for energy, so that it does not accumulate as unwanted weight gain.

What we do eat!

As a general rule, everything on the menu can be described as single ingredient food, meaning it does not carry a label with a long list of ingredients or said in another way – real food. When restricting carbohydrates, we are also restricting a major energy source, that needs to be replaced with another, which is fat.

When our diet is constructed from basic or real food, it is very easy to choose items where fat is simply a natural part of that particular foods structure.

Diet : the kinds of food that a person habitually eats

Some of the highest fat containing foods coming from plants sources are olives, avocados and macadamia nuts, as well as the oils derived from these sources.

In order to replace the carbohydrate energy from the bread you would normally eat with a green salad, adding some of the above mentioned items, would be a viable solution.

All animal based food, contain fat to a more or lesser degree. Salmon, rib eye steak and pork belly are at the higher end of the fat containing scale, whereas white fleshed fish, rump steak and chicken breast is at the lower end, eggs and dairy products fall somewhere in the middle. Animal sources of pure fat are butter, beef drippings and pork crackling, just like olive oil is a pure fat source from the plant kingdom.

Setting up very simple guidelines or rules for oneself, as to what you can and cannot eat, eliminates decision fatigue on a daily basis. As mentioned earlier, one such rule can be to stay away from or limit bread, potatoes, pasta, rice and breakfast cereal, as well as highly loaded sugary items. The numbers in red next to the items below is the carbohydrate/sugar content per 100 grams.

Choosing within the real food realm what to eat, is just as simple. Vegetables vary greatly in their carbohydrate/sugar contents and simply choosing the one with a lower content is easy by consulting the two visual charts below. Again, the numbers in green, orange and red indicates the sugar content per 100 grams.

The higher volume of food, which can be eaten at each meal with lower carbohydrate food compared to higher carbohydrate food, while obtaining only the same amount of calories and sugar, often comes as a pleasant surprise to many who start this way of eating for the first time.

Fruit, while not off the low carbohydrate menu completely, does have a naturally high sugar content due to it’s sweetness, and should be consumed with greater caution, when it comes to volume.

Eliminating all carbohydrate/sugar from our diet, is ofcourse not the goal, and even when it comes to fruit, there are some excellent low sugar options.

Leading on from limiting fruit in our diet, is giving some thought to the carbohydrate content in what we choose to drink. As you can see in the chart below, a glass of orange juice has almost 2/3 the amount of sugar as a bottle of coke.

Even when it comes to having an alcoholic drink there are some options which a better low sugar choices than others.

If you choose to eat a diet containing a good amount of animal sourced food, it becomes very easy to eat low carbohydrate, as pretty much everything is naturally low in sugar, with the exception of milk which contains about 2 teaspoons (11-12 grams) of sugar per 250ml.

Critical : the objective evaluation of a subject in order to form a judgement 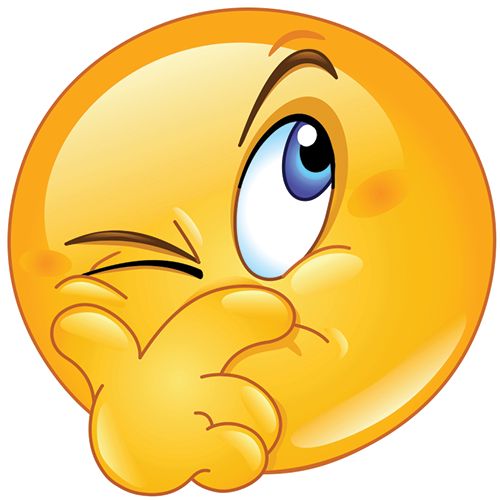 The information and proposals on the subject of nutrition, presented so far, is obviously suggesting, that a lowering of carbohydrate/sugar in our diet, can be beneficial for the proper functioning of our body, especially in the context of minimising unwanted body fat and maximising fat loss.

However, it does not mean that eating a low carbohydrate diet is a panacea, probably just a really good place to start.

Panacea : a solution for all difficulties

I urge you to think critically about all the nutrition information presented. Since my own diet and low carbohydrate pilgrimage began, many things have changed along the way and continue to do so.

Unorthodox : contrary to what is usual, traditional, or accepted

A belief within the low carbohydrate domain or any nutrition realm, is that consuming more protein than the body can use for repair of bodily tissues at any given time, can be converted to sugar by our metabolism and may therefore end up as body fat, in much the same way as if we over-consumed sugar in our diet. This process within the body is referred to as gluconeogenesis.

Gluconeogenises : is a metabolic process, which results in the generation of glucose (sugar) from non-carbohydrate substrates, including protein

What you see in the image below, is my average daily food intake over a ten month period. 3042 is the total amount of calories I averaged per day. Those calories are then sub divided into the three macro-nutrients ( Protein, Carbs and Fat) which all food consists of, to various degrees.

What can be observed, is that my protein intake, was 208.7 grams per day on average, this was 373% more than what is recommended for someone of my weight (63 – 64 kilos), to remain weight stable.

Consuming 3.7 times more protein, than what my body was supposedly able to use constructively on a daily basis to build and repair all the tissues of my body, should according to the theory of gluconeogenesis, have produced some negative effect, such as accumulated body fat over this ten month period. However, this is not what happened, quite the opposite!

The metrics in the image above, are derived from two Dexa Scans, which I undertook ten months apart. It shows quite clearly, that my total body weight remained almost stable (62.6kg vs 63.0kg) but my body composition changed drastically.

Body Composition : is used to describe the percentages of fat and lean (muscle, organs and bone) in human bodies

The photo and dexa scan results in October 2018 were done approximately one month after my 45th birthday, this is very interesting in the context of age related loss of muscle.

A progressive loss of muscle mass occurs from approximately 40 years of age. This loss has been estimated at about 8% per decade until the age of 70 years, after which the loss increases to 15% per decade…..

If the above extract is true, then gaining and maintaining muscle mass after the age of 40, must be seen as something very beneficial or even a huge advantage which normally does not occur, with the potential to increase our quality of life.

The objective for bringing up my unorthodox dietary experiment of consuming 200 grams of protein daily over a longer time frame, is to show that some beliefs we hold regarding the effect of certain food components, may not be as set in stone as they first appear to be.

Dr Gabrielle Lyon practices Muscle-centric Medicine and in this interview also reveals why she personally consumes 200 grams of protein a day and explains how Gluconeogenesis is something that works to our advantage.

A 25 minute presentation, which I did in October 2018 describing among other things, this particular experiment, can be found here.

Another dietary component, which has not as yet been discussed, is fibre. Consuming fibre as a way of ensuring proper digestive function, is another widely held belief. Nevertheless, while consuming a 200 grams of protein diet, my fibre intake dropped to around 5 grams daily, this is roughly 1/5 of what is recommended by most official dietary guidelines.

Fibre : dietary material containing substances, that are resistant to the action of digestive enzymes

My personal experience with low to no fiber has been and continues to be a positive one. Below you can see a graph showing my intake of fibre over time. 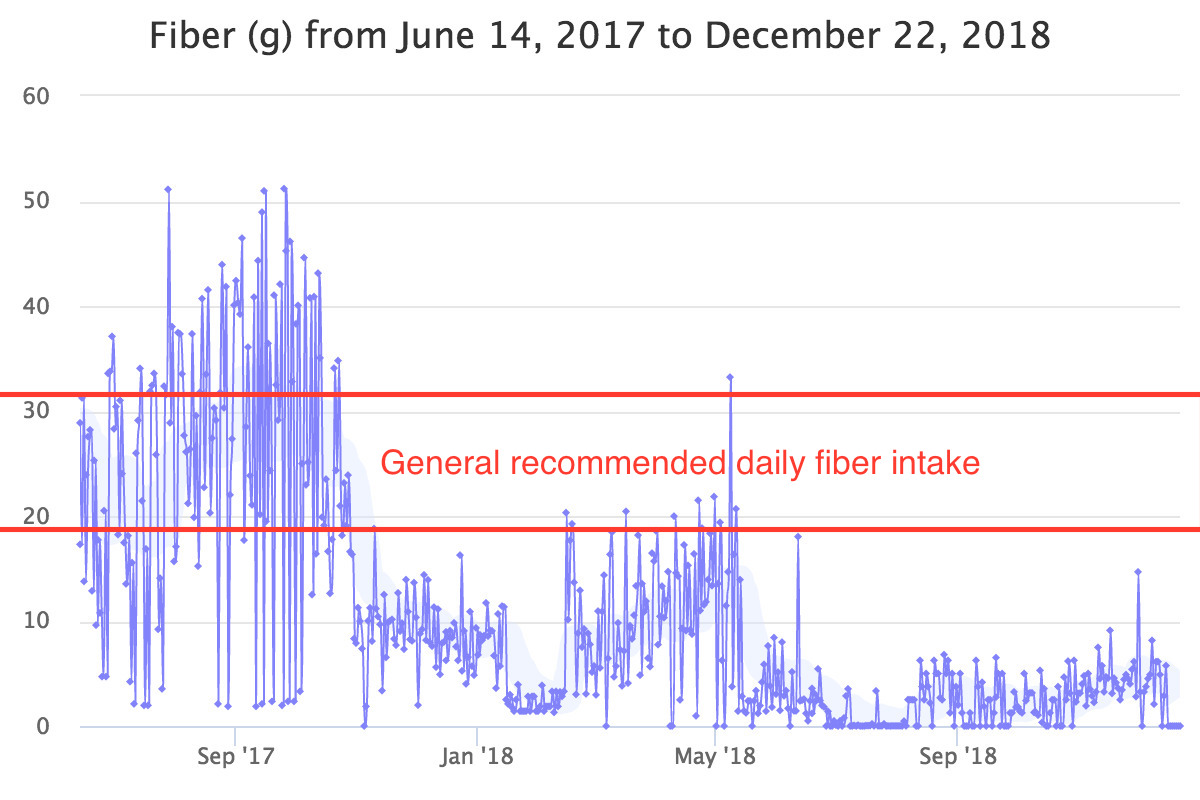 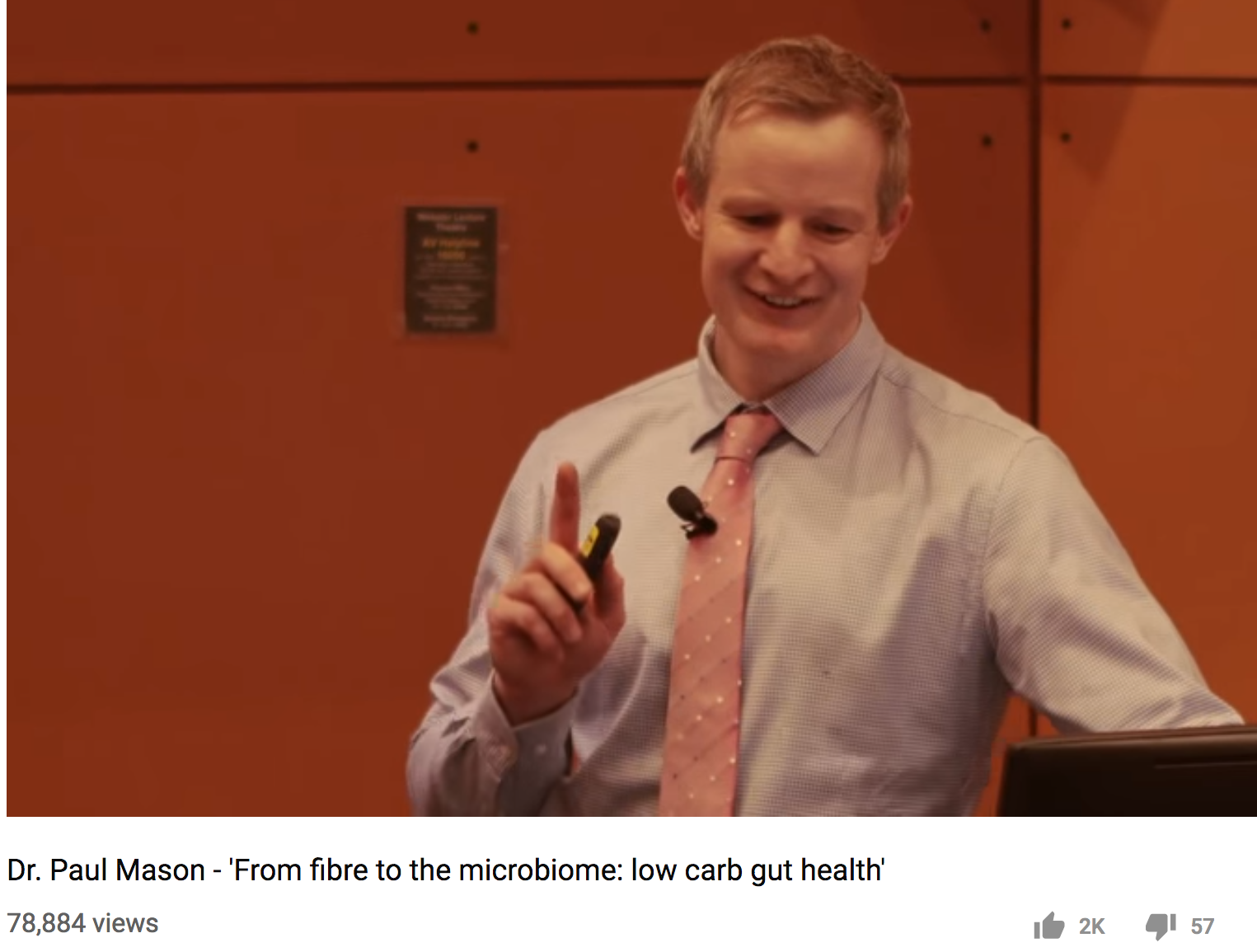 Having little to no fibre in our diet, is still a controversial subject and goes against what is generally accepted as a known truth.

Dr Paul Mason does an excellent explanation on how fibre interacts with our digestive system in this short video.